KOSOVO AND METOHIJA – A CRADLE OF SERBIAN NATION

Kosovo (or Kosovo and Metohija in Serbian or Kosova in Albanian) was the political center of mediaeval Serbia and makes the very essence of Serbian spiritual and cultural identity and statehood since the Middle Ages up today.The biggest number and the most important of Serbian Orthodox mediaeval monasteries (for instance, Gracanica, Pecka Patrijaršija and Visoki Decani) are built exactly in Kosovo and the headquarters of Serbian Orthodox Church – Patriarchate established in 1346 was located (till 1766) in the city of Pec in the western portion of Kosovo province called Metohija. The capital of Serbian Empire proclaimed in 1346 was also in Metohija in the city of Prizren which is known in Serbian history as the “Imperial city” or “Serbian Constantinople”.The cultural and demographic strength of the Serbs is best illustrated by the presence of 1.500 monuments of Serbian culture. Numerous outstanding noble Serbian families used to live in this province (known as “Old Serbia”), as families Brankovic, Hrebeljanovic, Music, Vojinovic, some of which were the inceptors of Serbian dynasties. In addition, a great number of Serbian noble castles existed all over Kosovo with rich aristocratic life going on inside their walls. They were also meeting places of Serbian nobility and centers where important political and other decisions have been taken and places attended by foreign envoys and outstanding guests from the noble foreign ruling families. In Svrcin castle, for example, the famous Serbian Emperor Dušan (1331-1355) was firstly crowned king in 1331, and Pauni, famous for its beauty, were favoured place of Serbian king Milutin (1282-1321) – a founder of monastery of Gracanica. In Pauni in 1342 Serbian Emperor Dušan had received Jovan VI Kantakuzin, one of the pretenders to the Byzantine throne at that time. Nerodimlja, with the strong fortress over the castle, was favourite residence of Serbian king Stefan Decanski (1321-1331) who built up the famous monastery of Visoki Decani in Metohija – a meeting place of western (Roman Catholic) and eastern (Byzantine Orthodox) architecture styles.The term Metohija means the land in possession of Serbian Orthodox Church and according to the archival documents the Serbian historians claim that c. 70% of the territory of Kosovo and Metohija was in legal possession of the Serbian Orthodox Church till 1946 when the new Communist authorities “nationalized” the land of the church under the policy of agrarian reform and delivered it to Albanian peasants.However, contrary to Serbian case, for Albanians Kosovo is not central national land: moreover it is just peripheral for the very reason they started to settle Kosovo from Albania only after the First Great Serbian Migration from Kosovo in 1690 during the Austrian-Ottoman War (Vienna War) 1683-1699. That Albanians, contrary to Serbs, are not aboriginal people in Kosovo clearly is showing the first preserved Ottoman census (“defter”) in Kosovo and Metohija done in 1485, i.e. only 30 years after this province became occupied by the Turks and included into administrative system of the Ottoman Empire (in 1455). By analysing the personal names and place names from this document already ex-Yugoslav linguists claimed that it is obvious that only 2% of them are of Albanian origin. However, after the First (when c. 100.00 Serbs emigrated from Kosovo to Southern Hungary) and the Second (during the new Austrian-Ottoman War in 1737-1739) Great Serbian Migrations from Kosovo ethnic composition of the province gradually was changed for the reason that Ottoman authorities invited neighbouring loyal Muslim Albanians from North and Central Albania (the speakers of the Geg dialect) to settle this depopulated province. Consequently, according to official Serbian statistics made immediately after the Balkan Wars 1912-1913 when Kosovo became re-included into the state territory of Serbia it was 50% Serbs and 50% Albanians living in this province. There are three reasons for such population change: 1) constant Albanian immigration to Kosovo and Metohija from Albania during the Ottoman time, 2) permanent Albanian terror against the local Orthodox Serbs (for instance, 150.000 Serbs are expelled from Kosovo in the years 1878-1912), and 3) higher Albanian birth-rate than Serbian one. Differently to Serbian case, Kosovo (except during the WWII) was never part of Albanian state that was, by the way, established for the first time only in 1912. Thus, undoubtedly, Serbs have pure historical rights on Kosovo in comparison to Albanians (like Lithuanians on Vilnius and Trakai areas in comparison to the Poles).However, for the mediaeval Albanian history Kosovo is of no importance: no one Albanian feudal lord or dynasty originated in Kosovo, no Albanian religious shrines (churches) in Kosovo, and mostly important, no Albanian place-names in the province. Even today, 90% of place-names in Kosovo and Metohija are of Serbian origin – even in Albanian language the name for the province (Kosova) has Serbian-Slavic root/origin: Kos (blackbird).Turkish-Ottoman invasion from the mid-14th c. (1354) means a fatal turning point in Balkan and Serbian history during the second half of the 14th c.The military advance of the Turks towards the Central Europe via the Balkans was a rather slow process. Serbian ruler prince (known in Serbian epic songs as the “emperor”) Lazar Hrebeljanovic (1370-1389) and Serbian nobility in the famous battle of Kosovo on June 28th, 1389 did everything to stop the Turkish invasion towards the South Eastern Europe. It was not only a clash of two armies led by their rulers Serbian prince Lazar and Turkish sultan Murat I (1362-1389), who both are killed during the battle, but also a clash of two civilizations, one Christian-European one and Islamic-Asiatic one.http://en.wikipedia.org/wiki/Serbian_Orthodox_Church      ...

.Gracanica (Graçanica) Monastery, completed c. 1321, Kosovo and Metohija:.See Full Size   http://voiceofserbia.org/serbia/node/239       If you reside in a parallel universe then welcome to Kosovo, the land of Albanianization and Islamization and all in the name of democracy. A flick back into history tells us that the Serbs were 98% of the population of Kosovo 600 years ago but today the Orthodox Christian Serbs are between 6% and 8% depending on various figures. Of course, the Kosovo Serbs became a minority because of the ravages of the Ottoman Empire, dhimmitude, Islamization, and Albanian support of fascism during the German Nazi period. Communism in the old Yugoslavia was the final nail in the coffin because Albanian long-term objectives became a reality and this applies to immigration and other important areas. However, this reality is ignored and instead the dehumanization of the Kosovo Serbs goes hand in hand in this parallel universe.

.....For ethnic Albanians the word Kosovo (or Kosova in the Albanian pronunciation) is considered as a symbol of "ancient Albanian land" which directly connects the ancient Illyrian and modern Albanian ethnic community in this territory. This is a typical case of "inventing the tradition" (E. Hobsbawm) having little in common with established historical facts. In more recent times Kosova is for Albanians a symbol of Diaspora- type of nationalism which feeds on constant demographic expansion as a form of ethnic legitimization of pretensions on certain highly disputed territory. The Diaspora-type of nationalism is, also in Kosovo Albanian case, closely tied to the control over disputed territory in order to establish a new national identity and. Diaspora-type nationalism fits in harmoniously with the social motivation of poor highlanders from northern Albania who have been flooding for centuries into the fertile flatlands of neighboring countries. The fact is that there is no scholarly proof of continuity between the Illyrians and present-day Albanians. This gap, unyielding void in the historical records from the sixth to the eleventh century, did not have any significant effect on the national mythology, on the establishment of the Illyrian myth as a constituent part of the Albanian national identity. Regarding Kosovo (as an allegedly Illyrian-Albanian territory) a double approach was applied: on the one hand the Illyrian-Albanian continuity (via the tribes of Dardanians) was proved, and on the other hand there were systematic attempts to "unmask Serbian myths" about Kosovo.

...The most celebrated fresco in Mileseva's Holy Resurrection Church, the White (or Belo in Serbian) Angel is a revered symbol of Serbia and an emblem for the United Nations.

..St. King Stephen of Decani is one of the best known Saints of the

.   The Ostrog Monastery in Montenegro - one of the most important strongholds of Orthodox faith in the time of Ottoman rule. The Serbs built such monasteries into the mountainsides to serve the dual purpose of safeguarding the monasteries from the Muslim marauders and as safe havens during the struggle for deliverance from Turkish tyranny.   http://en.wikipedia.org/wiki/Ostrog_monastery 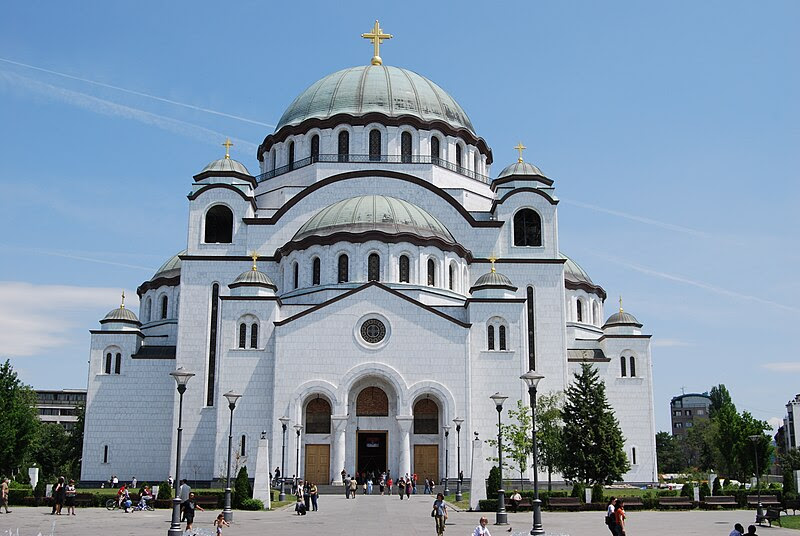 Serbia’s Orthodox temples are some of the most beautiful and imposing anywhere. Especially the famous Temple of Saint Sava, the largest working Orthodox church in the world. It’s been under construction for five decades, and boasts stunning white marble, tranquil gardens and decorative fountains at its entrance. Another impressive temple in the city is St. Mark’s Temple. Its domed towers take on a majestic look when lit up at nighttime. 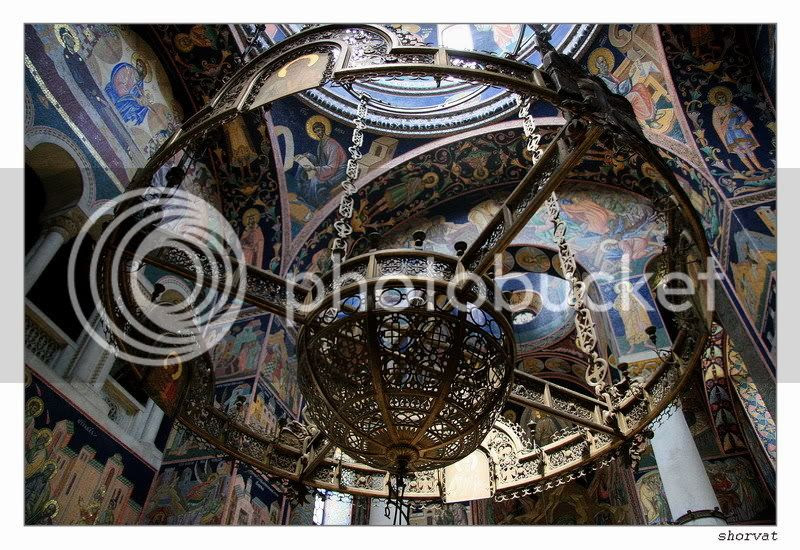 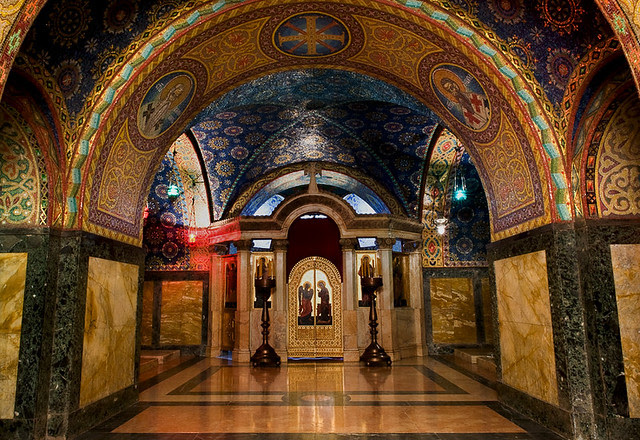 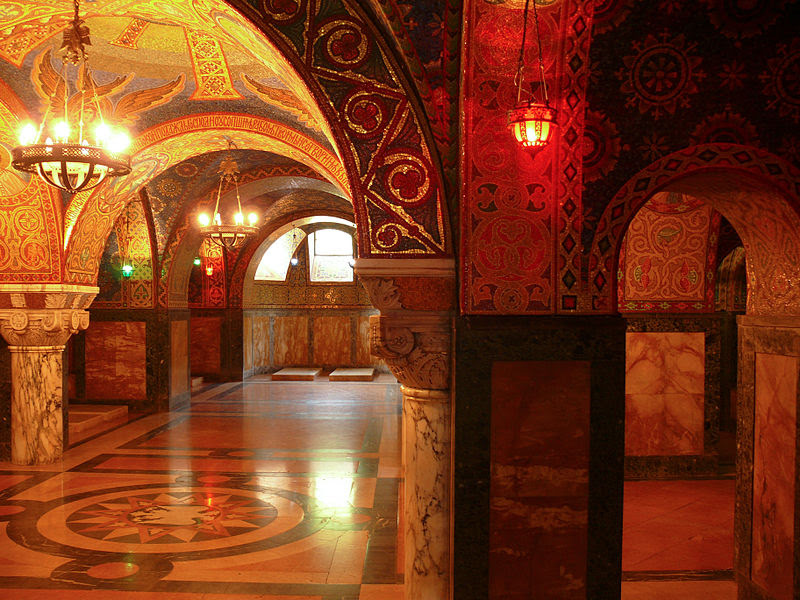 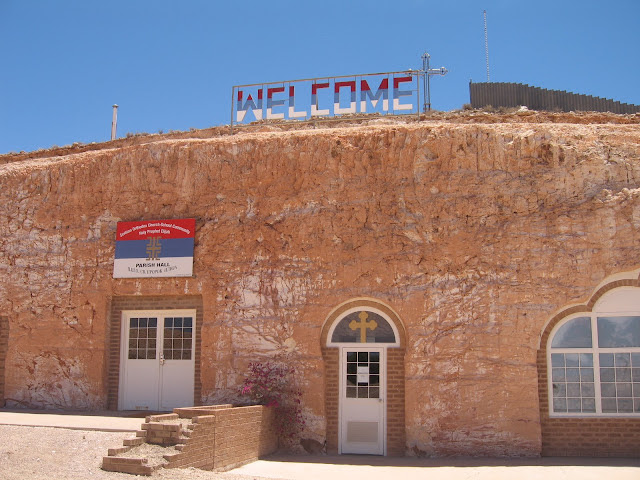 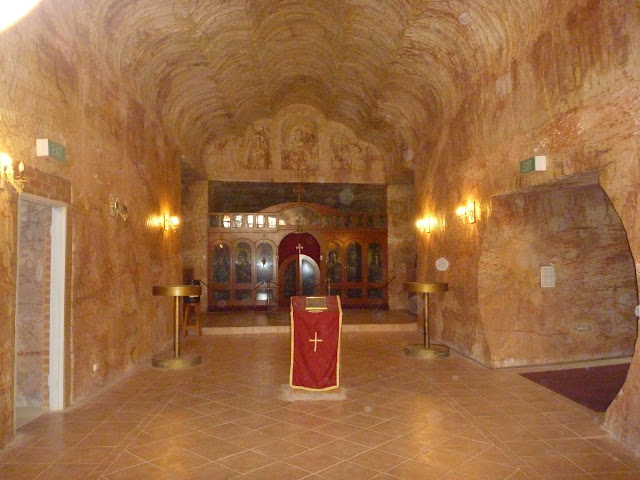 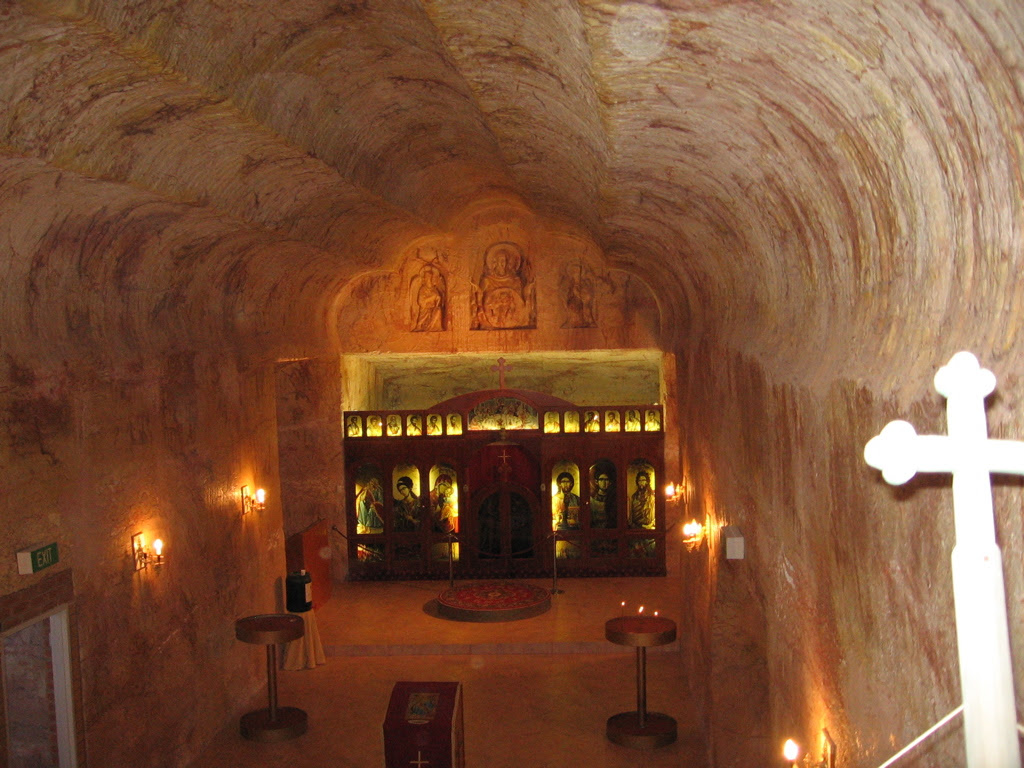 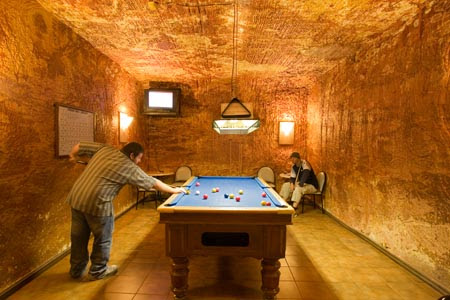 So for those that love drinking beer you will have an amazing experience drinking it from below. Interestingly there is a underground Serbian Orthodox church in Coober Pedy. Serbian miners built it for their own religions needs. 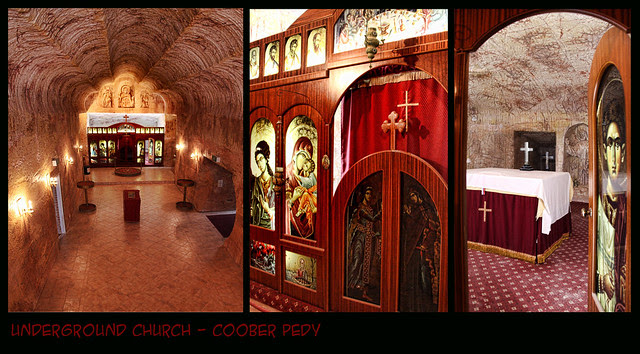 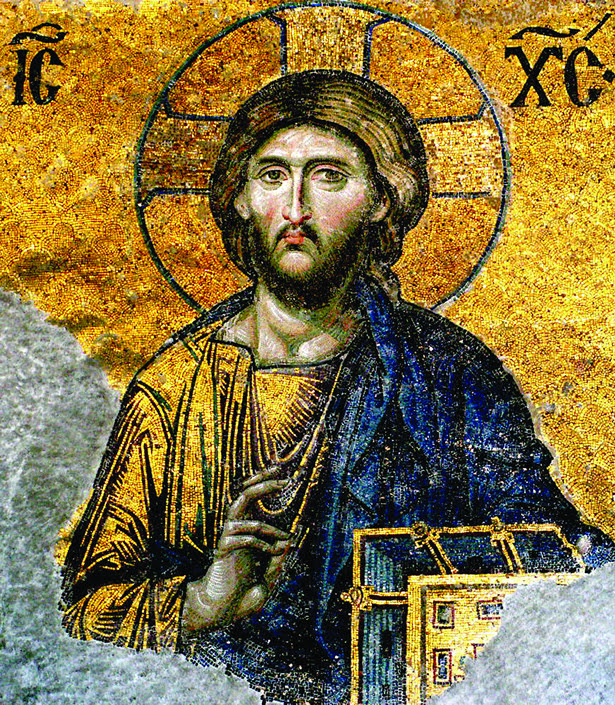